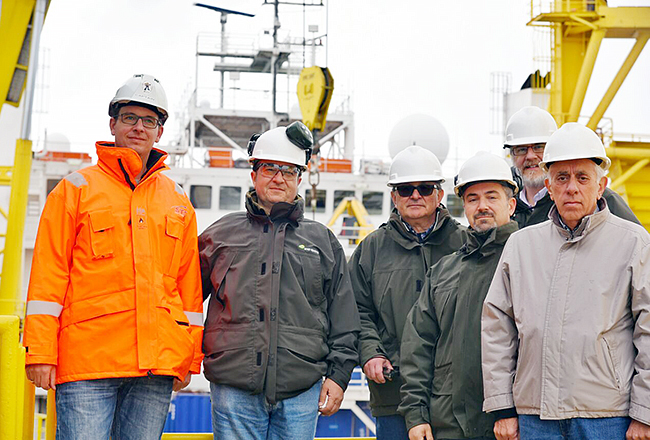 ENAP Sipetrol Argentina complied with one of the key stages of the Area Magallanes Incremental Project (PIAM in Spanish): the arrival of the ship that will install the new gas pipeline from Faro Vírgenes to the AM2 platform, at 18 kilometers from the coast, and the progress of the shore approach tasks, for the connection of this pipeline with the new onshore treatment plant.

The Area Magallanes Incremental Project (PIAM) is an energy project that ENAP Sipetrol Argentina and YPF announced jointly last June and aims to substantially increase the production of natural gas and associated crude oil from the Magallanes Field located in the eastern mouth of the Strait of Magellan.

In mid-December, the ship from China arrived in the port of Punta Arenas (Chile), carrying on its deck the Jascon 34 that is the vessel that will be used to install the new gas pipeline that will connect the AM2 platform with the new Gas Incremental Treatment Plant located in Faro Vírgenes.

This marks two of the most important milestones in the progress of the project, which is already underway and begins to clearly show itself in works and events.

On the other hand, the Draga (of Belgian flag), a vessel that carried out dredging and underwater excavation work for the initial laying of the gas pipeline, also arrived to the working area in the Province of Santa Cruz.

As part of the work of the shore approach, the winch to be used during the new pipeline pulling maneuvers has been installed; to begin later with the laying of the 18 km pipeline on the seabed to connect with the AM2 platform.

The PIAM, developed by ENAP Sipetrol Argentina and YPF, entails an initial investment of about 165 million dollars, which will contribute to Argentina's energy supply and the strengthening of regional energy integration.

The operation is generating a favorable impact on economic and social activity in Patagonia, based on a responsible and sustainable operation in the management of vital resources.